Procreate animation for Inktober21.
The prompt was 'Raven' - the frames are hand drawn and inked in layers then exported as an animated gif.

Sequential Illustration; A brand new module! The following posts are projects which illustrate something sequential about an animal

Ruby Gregory
This sequence depicts a squirrel trying to get to the food inside a squirrel proof bird feeder which is weight sensitive. meaning that when a squirrel attempts to jump onto it, it will spin stopping it from getting into the birds feeder.

The sequence shows that a squirrel won’t give up and will do and try anything they can to get their food, which I illustrated with a GIF I created on a loop to show a squirrels life on the struggles they would go through to get food.

I'd made leaf prints to use as a stencil on the squirrels to show its nature and where they live. I thought the effect of having the squirrels as leaves looked like another sequence of leaves blowing through the wind.

I decided to look closely into genetic modification and evaluating the extent of understanding what is too far? I wanted to portray the aspect that mice are used as the first testing stages as they are similar to humans and are of a mass population, personally I find that this isn’t a good enough reason to just make them glow in the dark!
Genetic modification is getting too much, it is now accessible to everyone and anyone, through a kit you can buy online; how many more glowing in the dark animals are we going to have? My aim was to create an expressive sequential illustration that metaphorically demonstrates the unnatural extent of making an animal glow. My final piece would be seen in a newspaper or as a poster.
Posted by Nicola Hay at 10:37 No comments:

Throughout this project I have explored a number of different sealife animals before settling on seahorses. I started the project looking at their ‘predawn dance’ within their courtship process, however my focus shifted once discovering their depleting numbers through ocean pollution and use within the medical field. My goal for my sequential illustration was to create an empathic response and send a clear and concise message of marine life conservation. I believe this message is strengthened when examining the grungy and desaturated colour pallet used (a clear juxtaposition from their usual vibrancy), along with imagery of medical equipment, ocean litter and metallic features within the image.

Email ThisBlogThis!Share to TwitterShare to FacebookShare to Pinterest
Veronika Antlova

I decided to illustrate a story about a former family dog that was once adopted from a shelter as a Christmas present and now abandoned and left to his own fate. By choosing this theme and illustrating this story, I wanted to raise awareness of irresponsible dog adoptions, dog abandonment and animal cruelty.

I focused on rhino poaching. While researching I found out that most of the poaching happens in South Africa so I based my zine on this location. The reason why I created a zine is that I wanted to make people aware of how serious this problem is but in an engaging way; creating a zine allowed me to fulfil the project brief as it is is a clear way to convey a story or information within a series of images. While researching zines a graphic designer David Carson influenced my work, I tried to experiment with his style with experimenting with the type. I did this by using the warping and distortion tool on Procreate. This gave an effect where some of the text cannot be as easily read, but that’s what I found fascinating in Carson’s work, you cannot read his work clearly but you know what he’s trying to portray. 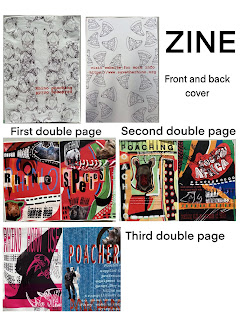 I started by looking at animals and emotion, focusing on how they emote through facial expressions and body language. I then translated these themes onto foxes as they had become a common through line within my sketchbook. I then shifted my focus onto experimenting with the idea of overlaying multiple images to explore how we perceive animals emotions; this then lead onto the idea of duality within animals and how foxes are perceived (cute, docile, mischievous etc.) verses how they genuinely behave (violent, akin to a vermin etc.). My final solution demonstrates the idea that foxes are more than their stereotypes that are depicted within tv, film and social media. 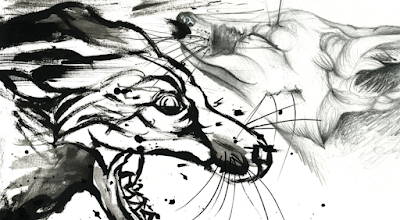 About the Illustrated Menagerie

The Illustrated Menagerie is an archive of images by Illustration students studying at the University of Portsmouth, UK
Our aim is to build a resource of images resulting from sustained investigation and visualisation of the animal kingdom, the research underpinning these images is their inspiration, and the images may be informed by a great breadth of source material including; art and illustration, literature, myth, legend, poetry, statistics, philosophy, phrase, fable, music, performance, symbols and science.
Our thanks to Meredith Phipps for our hare logo, to Danielle Taylor for the blog background image and all the students, past and present, for their work.